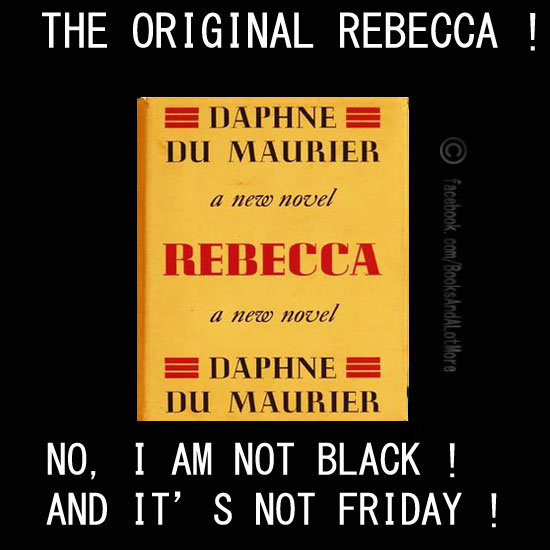 First, something about Rebecca: Rebecca is written by Daphne Du Maurier and was published first in 1938. It has been adapted several times for film, television and theatre. It is the story of the second Mrs. De Winter and the events (Amazon describes them as ‘chilling’) that took place as she started her married life. There is one very peculiar thing about Rebecca and that is the complete ignorance of the narrator’s name. Till the end, we do not know what she is called.

Having finished reading The House of Mirth by Edith Wharton just the day before I started reading Rebecca, I felt dismal and depressed. No, it’s an excellent book. That is not what made me feel dejected. It was the overall theme of the book and the tragic end. It seemed so real sometimes.

After that, Rebecca was a whiff of fresh air. It keeps you on the edge waiting for something to happen.

The book has nothing but Rebecca all over it. Rebecca is there everywhere. In Monte Carlo where the narrator meets Maxim (Max sounds so much more sexy, no?) de Winter the first time. You can feel her in the serpentine drive to Manderley. She’s there in the red rhodendrons at Manderley and the desk in the morning room. She haunts the west wing with her indomitable presence. Her presence in the heart of Mrs Danver and the rest of the staff is pitiful. So is her presence in Maxim’s thoughts. However, the most troublesome is her constant presence in the new Mrs. De Winter’s life. She is completely over shadowed by a dead woman.  Rebecca makes her insecure and downright useless. Mrs. De Winter (for lack of a name) imagines what could have been. She imagines Rebecca sitting at the same place and going about with her duties. She weaves little stories around her. And that makes her seem so much more real. She’s dead but still there somewhere, from the first page to the last.

I couldn’t help but like Rebecca (the character), even though she is supposed to be evil and all. At least she lived life on her own terms and in the end, it seems as if died also on her own terms. I pitied the nameless narrator because she’s a weak person in spite of being the ‘good’ one. The book does tend to justify murder, in the name of evil even though murder is murder. But what can you say to that when even religious books justify murder in the name of ‘vanquishing evil’.

I suppose I did understand the second Mrs. though, all her insecurities and helplessness in being constantly compared to Rebecca. I suppose most women have also been made to feel insecure. Either we are not the perfect size. Or we are not pretty enough. Sometimes, not fair enough. Or not ‘homely’ enough. We work so hard. Always striving for that elusive but perfect figure, acceptance from society and sometimes, the love of a man who probably doesn’t even deserve it all.

Here, she often says that the father and husband are essentially the same. Meaning that they are both supposed to look after you. I felt a little uncomfortable with this. But later as I read about Daphne Du Maurier on the Internet, I found out that it was rumoured that she has an incestuous relationship with her father.

Anyway, let’s not go there. Rebecca is a far more interesting character. You cannot help but love her. Well, that’s what she was like, with people. Sleeping around was how she used go on a power trip. There’s something quite tempting about somebody who breaks societal rules.

Somewhere, there’s both a Rebecca and the second Mrs De Winter in us. Yes, each and everyone. That is why you don’t feel any revulsion for any of the characters. After all, how can you hate yourself?

Anyway, get up, go now and read the book.

In this book, Neil Gaiman has selected some of his favourite stories featuring monsters and beasts. Most of these beats exist only in myth or folk lore and some,... Read More