Probably this was the wrong time to start this book. I shouldn’t probably have started Compass Box Killer by Piyush Jha right after finishing ‘The Cuckoo’s Calling’ by J K Rowling writing as Robert Galbraith. The book’s in the same genre of crime fiction but they are both so different. 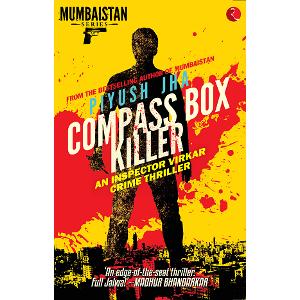 If it were to be made into a movie, Compass Box Killer would be your masaledar (spicy, for lack of a better word) Bollywood film with somebody like Abhishek Bacchan playing Virkar and Priyanka Chopra as Raashi. Why ?  Because it has all the ingredients of a box office hit. It has a story line with stereotypical characters. It is a whoddunit with some action, a smart talking main character, a good looking female and an unknown villain who is a serial killer. There is politics, love, sex, betrayal and some smart thinking on the part of the hero.

The book does has a predictable story line and I was left wondering what Virkar actually looks like as the only words used by Virkar by the author are that he has an unconventionally handsome face. The other things about his appearance are left to the reader’s imagination. There could have been more detailing done by the author.

This book for those not heavily interested in reading and are just looking for a way to pass time because it is the perfect book to read in a train or the metro. It is fast and does hold your attention. Read it if you are in the mood for a fast and light read as it is a good de-stresser after a hectic day.

Note: A copy of this book was provided for honest review by Rupa Publications.

About Death and Looking for Alaska by John Green

This week, I finished reading Looking for Alaska by John Green and Men Without Women by Haruki Marakumi. I am sitting in my cozy corner in my room –... Read More

Book Review: The Signature of All Things by Elizabeth Gilbert

August was an exciting month with so many book releases. However, September doesn’t look too bad either, with books by Margaret Atwood and Jhumpa Lahiri set to release. Check... Read More

I read this book few weeks ago and pretty much felt the same way! It is good fodder for a Bollywood movie script……

I agree! I checked out your blog today. Looks interesting ! 🙂

Uh oh, I am due to receive this book for review. The premise sounds interesting, but it doesn’t look like you enjoyed it too much, and masaledaar movies are boring 🙁

The book isn’t boring, although it isn’t anything new. Virkar’s dialogues do have some pizzaz but I was a little disapointed with the plot in general. It was a bit predictable and Virkar seemed to have it too easy. I guess I am just the wrong target audience. 😀

Hi Shaili. Thank you very much for the review. Indeed, it is difficult to review two crime-fiction books back-to-back, so cheers to you for doing so. I shall work on your pointers about elucidating Virkar’s physical description in his next outing. Also, I just wanted to ask, when you say ‘masaaledar’ do you mean it as ‘trashy’ or do you mean it differently?

Hi Piyush,
Thank you for dropping by!
Definitely not trashy, in case you got that impression. The book has ‘masala’ with respect to the dialogues, the characters and the plot. There is something in it for everyone who reads just for entertainment but it is not for a serious reader.