A Cool Dark Place by Supriya Dravid is a very interesting novel. Essentially, it is about Zef and her family. No, wait. It’s about Zef’s family and how she comes to terms with her family and it’s history. Like they say, you can never truly escape your past. It’s about Don, her grandfather who’s charming and at the same time, notoriously selfish in the way he wants to hold on to his daughter, who is Zef’s mother. It’s also about her relationship with Gravy, a man she’s always thought of as her father. Most of all, it’s about finding yourself through the past as memories keep traveling back and forth.

Supriya Dravid says, “I’ve been writing all my life. It is the only thing I don’t fear. I wanted to write this book as I was coming out a tough relationship, and I wanted to create another future that I would be happy to look forward to. And this book was just that. It gave me something to wake up for, and gave me a new drive to live, breathe and engage with these characters at all hours of the day – when I was awake and even in my dreams. I wanted to create this parallel universe that I could escape into and this book did just that. Even though the book has a dark tone, it was a happy preoccupation for me.”

Zef, the main protagonist (No, wait, that would be Don, he manages to be omnipresent, much to his daughter’s annoyance) is a young girl with a family which undergoes a series of tragedies. Mostly created because of one man that is Don. The book starts on a somber tone with Gravy’s death and her mother is severely heart broken. This is when the both of them really start talking and her mother walks into the past, narrating bits and pieces to escape the void that has been created by Gravy’s suicide. But wait, let me not give away the whole book because there’s a lot of things that both the reader and Zef discover as the story moves on.

I asked Supriya, “Zef is an interesting character but we learn more about her family than her. You haven’t really shown us her life apart from that with her family. Was that deliberate?”

She answers, “Yes, that was deliberate. Mostly because the book is not about Zef, it is about her family as seen through her eyes. It is about how she makes sense of her world through the chaos that descends in their lives, and its impact on her. The madness that ensues does not allow her to escape her family’s past – at least for the moment.“

I loved the characters in the book. They are all eccentric and endearing at the same time. I really liked Zef’s mother. She loves with no holds barred. That is primarily her philosophy of life. Gravy is a sweet character about whom you learn a shocking secret. Zef’s grandmother is another curious character in the book. But the one guy who beats them all is Don, Zef’s grandfather. I think he is the reason Zef narrates this tale.

“Yes he is so bloody psychotic, isn’t he? Some aspects of Don’s life are loosely based on my maternal grandfather. But a lot of it is also imagined and inspired by many other interesting people I’ve met”, says Supriya Dravid.

I wonder if Supriya Dravid will write a sequel to this book. I sure would want to see Zef again, but this time with her future as the main theme of the book rather than the past.

“The thought did occur to me and a lot of people have asked if I will do a sequel. To tell you the truth, I haven’t really thought of Zef’s future. A lot of it has to do with allowing the reader to imagine the impact on what she has learnt and what she has chosen to keep as a secret will have on her future. I think some stories should not be meddled with any more. I want to let it lie (for the time being at least). They need to breathe and exist just as they were meant to be. I’d like to explore another story with a different tone, texture and a narrative that stretches and terrifies me at the same time.” says Supriya.

Dravid’s writing is beautiful. There is a natural flow in her words and her descriptions are profound. There are some books you read just because you want to appreciate the beauty of the written word and this is one of them.

Note: An advanced review copy of the book was provided by the publishers, Random House India.

Very rarely, does a 21 year old manage to get a break in the Literary world. A three book deal (out of a seven book series) with Bloomsbury Publishing is what... Read More 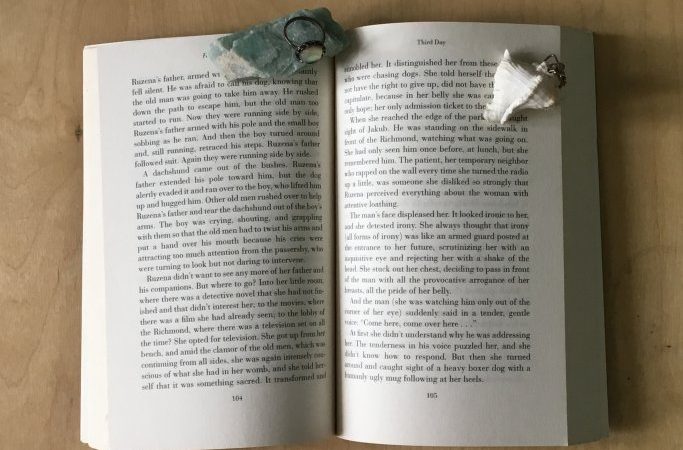 I finished reading Farewell Waltz by Milan Kundera yesterday night. Now, I have dozed off while reading this book on numerous occasions and this is what happened yesterday also,... Read More

Revenge Wears Prada : The Devil Returns is the sequel to the very popular book ‘The Devil Wears Prada’, based on which a movie starring Meryl Streep and Anne... Read More

Respected mam I have sent a query for a book review on your reputed website. The book link is: https://www.amazon.com/Wiccan-Waltz-Wicca-Chronicles-Book-ebook/dp/B06XBB4Y6M/ref=sr_1_1?ie=UTF8&qid=1488174131&sr=8-1&keywords=the+wiccan+waltz