The current status of our chaotic country seems to be an extremely fitting time for this book to be written. With our country riddled by dishonest, utterly inept politicians, a failing bureaucracy, a police willing to act only at particular instances, a media perpetually high on steroids, shrewd spiritual leaders (better to call them businessmen, no?) and people divided by stupid things like caste and religion, the book ‘The Competent Authority’ by Shovon Chowdhury is a commentary on the prevailing social and political conditions in India. 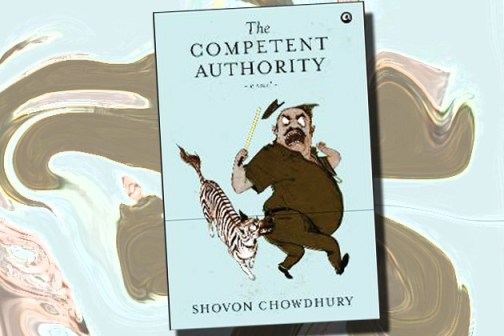 With 452 pages and a small sized font, at first this book seemed to pose a challenge to me. Lately, things have been hectic and I have found it hard to sustain the energy to write on this blog, after a long day and the commute in the metro. However this book is anything but boring.

The book The Competent Authority is a witty take on life in the year 2050 in a scenario when cities like Delhi and Mumbai do not exist (at least not in the same form we know them today) because of a war with China (they got nuked). Bengal has declared itself to be a Chinese protectorate and India is controlled by a bureaucrat known as the competent authority, with the PM only being a figurehead(Oh well, not that it is quite different in real life too). The competent authority is invisible to the public and is a megalomaniac with a desire to go down in history as the one who successfully spurred economic growth and reconstruction. Not satisfied by the ongoing reconstruction efforts which have managed to do little ‘re-construction’, the competent authority wishes to ‘re’-start the ‘re’-construction process completely. This, he aims to do so, at great cost, even if you disregard the whole madness of his scheme. Essentially, this is a story of how he is stopped from carrying out his mad plans.

There are many interesting characters who join him, especially Ali – an Al Queda member who isn’t much of a terrorist, Banani – a school teacher who is not as helpless as her husband seems to think, Pande – the epitome of the paunchy Indian policeman or Pintoo – a character without whom the book would be incomplete. Actually, the book would be incomplete even if one of the other characters were to be removed.

The writing is funny and simple, neither compromising on the laws of language (or the ‘literary’ quotient, if you may choose to call it so) nor becoming obtuse to the reader. At the start, one may get a little confused when so many characters are introduced at quite the same time. However, the author has listed all the characters in the book at the start, describing them in a short and funny way.The Author has made fun of everybody, whether it be spiritual leaders running a business in the name of faith, bureaucrats, Bengalis, communists, capitalists, dynasty politics, right wing fundamentalism and even Honey Singh (Yey!).

This is a satire but at the same time, the book becomes sensitive at certain places, giving time to the reader to meditate and take it all in, the whole meaning of life, hidden somewhere in between the different layers of sarcasm, speculation and irony. Extremely poignant are two scenes, one in which Gandhi talks about himself and what’s he done, to Chatterjee, who’s been sent into the past to save Gandhi. The other scene has one of the central characters losing his hand. The book also leaves you with a positive message, albeit a little cliched.

Note: A review copy of the book was provided by the publishers, Aleph Book Company.

Writing a book review becomes enjoyable when reading the book has given one some pleasure and I have to say, writing this review is one of the easiest things... Read More

So, it’s been a chilled out week, as compared to the last few ones, although I have had to get to work quite early. But…that has meant that my... Read More

Because the sun also rises, and for Hemingway

The sun also rises by Ernest Hemingway is not one of his books that he is renowned for. Released in 1926, it received mixed reviews, although since then, it... Read More

[…] Chowdhury is at his witty best when he answers some of the questions I pose to him. Do read my review of his latest book ‘The Competent Authority’ before reading […]

Book Review : Murder with Bengali Characteristics by Shovon Chowdhury – Books and a lot more Sep 23, 2015 at 6:51 am

[…] Chowdhury’s Murder with Bengali Characteristics is a sequel to his book The Competent Authority (Book Review | Author Interview). Although a sequel to the book, it is a stand alone novel. While The Competent […]