First of all, Happy New Year !

There’s something impossibly optimistic and happy about a new year coming your way. It fills you with hope and faith that things are going to be so much more better in the new year ! Not to forget, the pleasant surprises which may possibly hit you on the face in 2014. 😀

But before giving a proper welcome to 2014, it’s important to give a good farewell to 2013.

2013 started with a bang, with a job in hand, this time last January. Next followed the craziest last term at MICA and then convocation. Many things happened this year, most of which I am grateful for, even if I may crib about some things on those occasions when everything seems to start weighing down on you. I had some interesting experiences thanks to a sales job which is making me tougher day by day, made new friends, became more open to new possibilities and ended up spending the new year partying with completely unknown people, at a friend’s place (which is a first for me, considering my intrinsic shy nature). And I am happy I did that, it feels like growing up (And I don’t mean growing up in age).

2013 has also been an interesting year for this blog. It was started in the summer of 2012, largely because of a boring internship and nothing much to do. However, second year at MICA consumed me which led to a big lull and it wasn’t until the last term in MICA that I started being serious about this space of mine. 2013 was an active year with me updating quite regularly, with reviews of many new books (thanks to all the lovely publishers who keep sending me books and expecting nothing in return, except an honest review), interviews of interesting new authors in the literary scene and ‘literary’ spaces in the city.

Here are some stats: 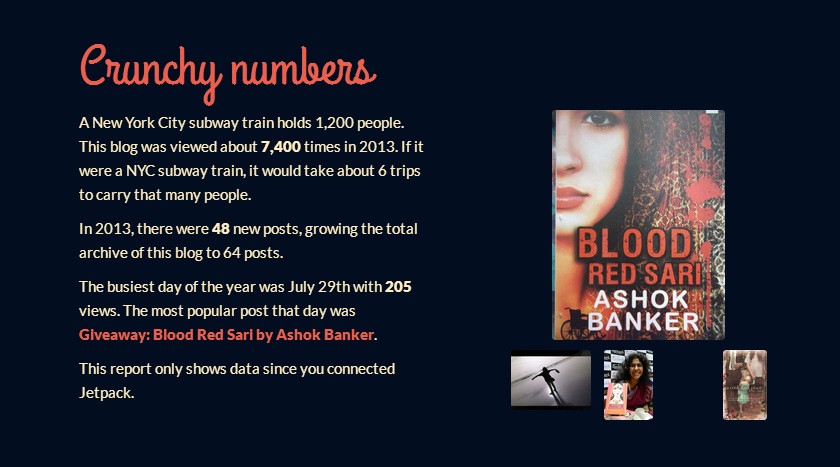 I always imagined that most of the readers would be from India, since I do not publicize this space too much, except sharing it on facebook. However, I was glad to find that there are people from all over the world, who checked out this blog in 2013. 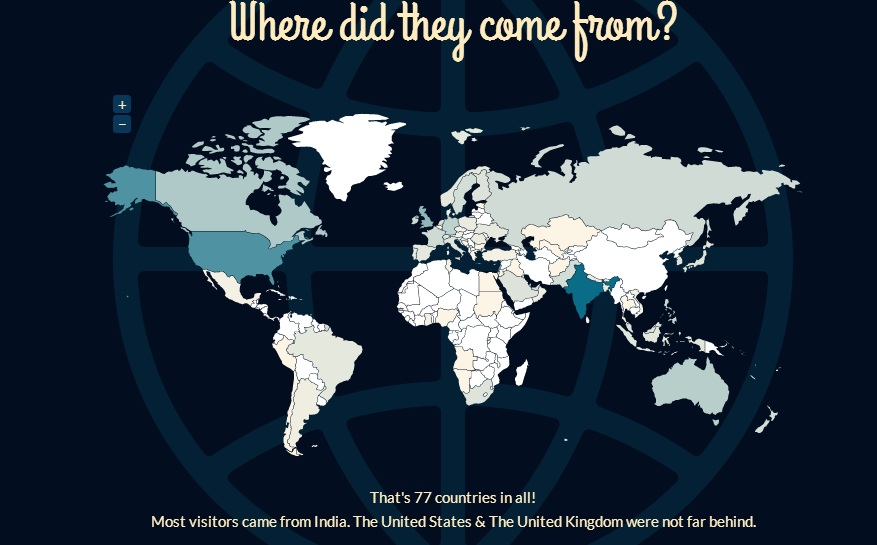 Books I enjoyed the most:

My Favourite Review: The Competent Authority by Shovon Chowdhury

Most Viewed Book Review: Hitched – The Modern Woman and Arranged Marriage by Nandini Krishnan (Looks like today’s woman is really worried about marriage 😛 )

Most Popular Giveaway: Blood Red Sari by Ashok Banker and The Hit by Frederick Forsyth (I am not surprised!)

Most viewed non-bookish post: Free – A Poem for Independence Day

The Most active commenter was Abhiroop Banerjee who also did a great guest post called Tragic Pitfalls of Bibliomania.

This year also saw me making plans for taking this website to a whole new level. With priorities and aspirations clashing with each other, I haven’t really been able to set the balls rolling for the same. However, this will always remain a dream.

I have to thank you all for all the love shown to this blog and do hope that you shall continue reading this blog. On a personal front, I have been a little lazy these past two months and lost out on the momentum. There are reviews promised which haven’t been done yet and I can see a big pile of books waiting on the table. I also finished reading only 4 books out of my bucket list and I have learnt that although, most of the books I got from publishers have been good reads, I lost out on reading those which I had wanted to read from a long time. Next year has to be all about balance, but at the same time not losing out on adding new stuff to this space and information about all the new books coming out.

Have I told you all how I started writing this blog? I was inspired by a book I had started reading, called Stuff I’ve been reading by Nick... Read More