A Room Without Books

“A room without books is like a body without a soul.”

Yeah, yeah, I know, that’s probably one of the most worn-out quote ever used.

But I never quite thought realized the truthfulness of this statement till 2005 happened. That was when I left home for college. Before that, the book shelves in my room would be full of books, mostly bought by my Uncle. ‘Books’, which was always the answer I gave whenever he asked what gifts I wanted from abroad (read USA). The first books that I read were from the Nancy Drew series. Gradually, I moved on to others. Mostly, I relied on my school library for books were a luxury then. But there was a time when I would read wherever I went. In the school bus. Sitting on the swing. During lunch breaks when the boys in my class would play football with the fan regulator and the girls would sit and gossip (That’s stereotypical, yes, but that’s what happened). I used to read while walking from the bus stop to my house. My mother was always worried I wouldn’t meet with an accident. Books were a big part of my life in school.

And then college happened. I realised how pitiful a room looks without books in 2005 when I first entered the small room, where I was supposed to live as a paying guest for the next four years while I pursued my graduation degree. It was small, yes, and I was supposed to share it with another person. I wasn’t prepared for that, what with my six big bags containing all the stuff that I gathered over the years. There wasn’t much space for my clothes and the girly-accessories that I had. Where would I keep all my favourite books that I had brought with me?

Slowly, I realised that there wasn’t any room for my books. I was already doing this: 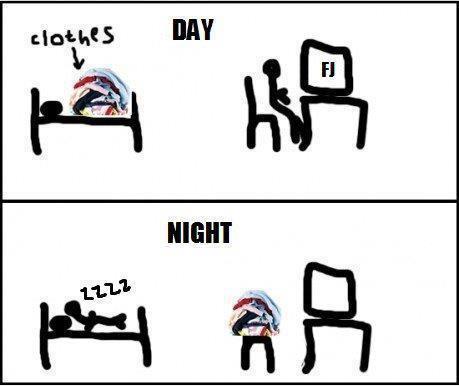 I had to make place for my dull engineering books (which I rarely opened). And so, in the next college break, I returned all my favourite books to their privileged places in the shelves in my room at home. The room where I lived looked so dead now. The colours were missing. It’s even more pathetic when other books titles like ‘Fluid Mechanics’ and ‘Strength of Materials’ stare hauntingly at you and you wish you had your copy of Ernest Hemingway’s ‘For Whom The Bell Tolls’ right beside you.  A Harry Potter book would also be more than enough. To overcome my sorrow, I started to scribble book quotes with a pencil on the walls. My attempts were met with stern warnings from the owner to kick me out.

Boy, how glad I was when I started working and there was enough room for my books in the apartment which my company had provided. I was living in a small town where there wasn’t a good library but what the heck, I was earning enough to keep on buying a lot of books every month. So grew the number of books in my room.

After almost two years, I decided to go back to college to get a management degree. And I resolved, I would make room for my books however small the room may be.

Yes, Cicero was so right. Rooms just don’t feel good without books. You would agree too, wouldn’t you?

I found The House that BJ built by Anuja Chauhan on Kindle Unlimited. The Unlimited subscription has been useful. I have discovered new books which have been good to... Read More

It was quite a week for fantasy lovers this week as we saw news from popular fantasy authors and publishers about  upcoming books! George R R Martin released an excerpt... Read More

Thanks for dropping by! Please keep following the blog. 😀