You could say that Tantra by Adi falls in the ‘Chetan Bhagat’ genre. I generally try to avoid the ‘Chetan Bhagat’ genre of Indian Fiction. You may not believe it, but there’s usually at least one person in the Delhi Metro who’s reading a Chetan Bhagat book. Everyday. We may criticize him all we want, but you have to hand it over to him for ‘creating’ (for lack of a better word) this genre of pacey novels with story lines that everybody seems to identify with.

Anyway, coming back to the main point, although Tantra by Adi is  a light read, it’s not boring and has a kick ass heroine. And, I was in a mood for a light read.  So, randomly, I entered myself for the giveaway of the book ‘Tantra’ by Adi on GoodReads and imagine my surprise when I won a copy! 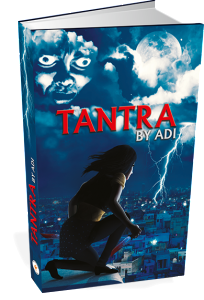 This book is about Anu, a vampire hunter who moves to New Delhi for her own reasons, which are actually more personal rather than professional. She’s helped by Amit, a co-vampire hunter (who’s in the friend zone for now) and flirts with Gaurav, a handsome guy she met in a wedding which she was forced to attend by her Aunt who wants to see her ‘settled’.

In this book, she ends up dealing more with a Spiritual Guru gone bad rather than vampires although there is also a mysterious, enigmatic Vampire somewhere in the picture. I am assuming he will play a bigger part in the next book and I won’t be surprised if this is going to be a series instead of a stand alone novel. There are lots of questions that need to be answered and for that, a sequel(s) would be necessary. It also deals with the use of ‘good’ Tantrik magic, which is basically going to be how she ends up defeating the bad guys.  The author has quite nicely included, in the background, the rigmarole of arranged marriage and so-called dating for the same. There is no overdose of romance (thankfully!) and lot of action. For a change, a female is the main character who makes the first move and ‘saves’ a male love interest. (Yey for female empowerment!)

Now, the book does have some grammatical mistakes at different places but this ought not to discourage a reader whose sole purpose in reading a book is to get entertained but not have to think too deeply about anything else. So, take it for what it is, a light, breezy but still pacey, funny book which manages the passing of time in an entertaining manner.

Note: This book was won for free in a Giveaway on GoodReads

Book Cover In the beginning, I had absolutely no idea what this book was supposed to be about. By the end of it, the purpose wasn’t clear as crystal,... Read More

BOOK TITLE: The Hit   Author: David Baldacci (Update: Participate in the giveaway to get this book for free !) About the author:  David Baldacci made a big splash... Read More

Writing a book review becomes enjoyable when reading the book has given one some pleasure and I have to say, writing this review is one of the easiest things... Read More

Hey. Nice review. 🙂 I liked the book for the female hero as well, though I thought she became a bit too “bold” for my taste. And I was totally rooting for some vampire stuff, which was not there! I hope it is more prominent in the next one.!

Hehe, I liked that she was bold. Female heroines always need to embrace more ‘masculine’ traits to gain some credibility, such is the sorry state of affairs. :-/
Thank you for stopping by my blog! 🙂