I was pretty excited to read this book, being a Harry Potter fan, although ‘Casual Vacancy’ didn’t really excite me. I couldn’t really control my excitement when I received The Cuckoo’s Calling by Robert Galbraith (J K Rowling, if you didn’t know!) for review by Hachette India, quite unexpectedly (I was told it may not be available in India till some time). What a pleasant surprise, it was, thanks to Hachette India! 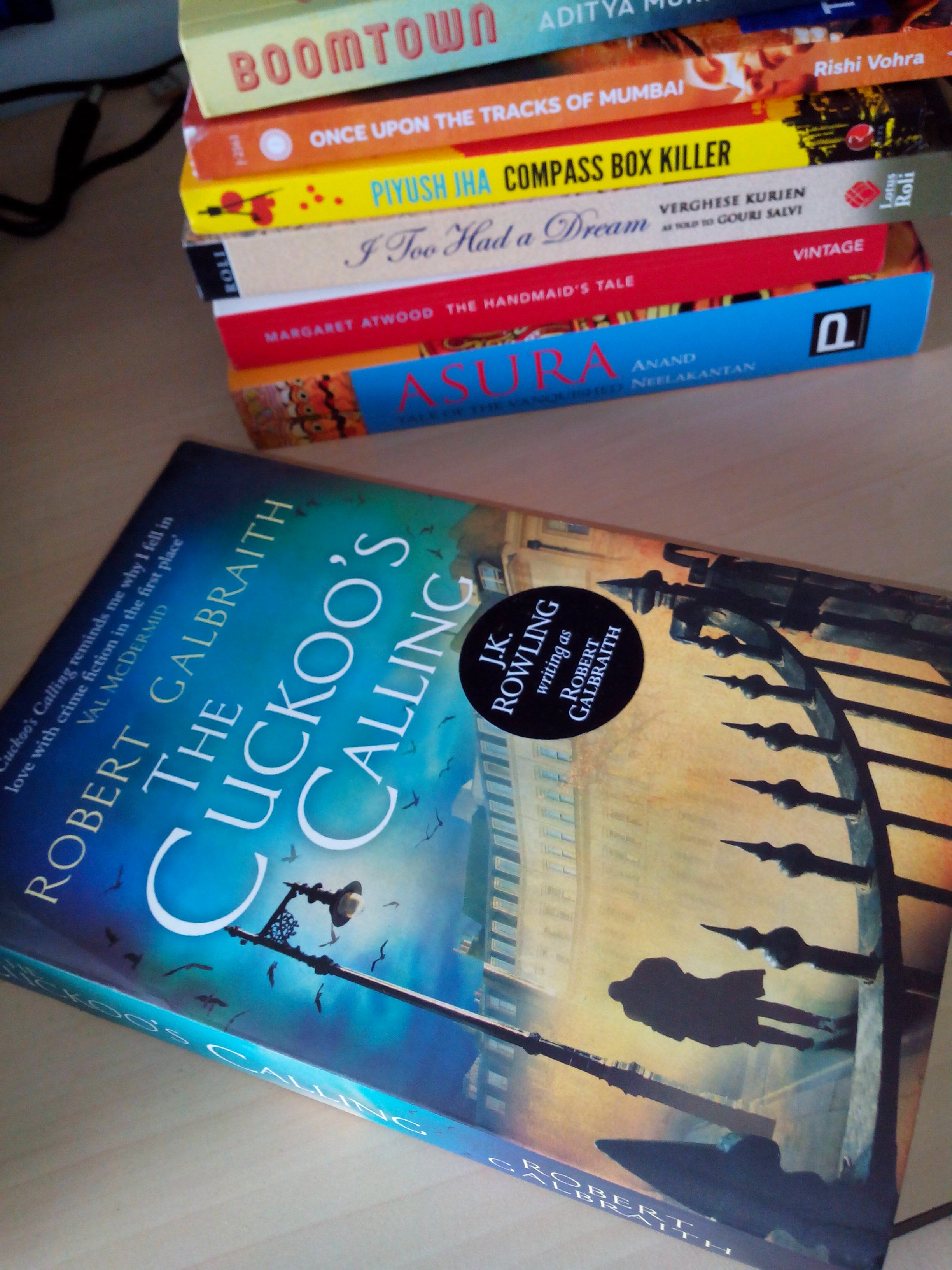 The story starts with a poem called A Dirge by Christina Rossetti.

Why were you born when the snow was falling?

You should have come to the cuckoo’s calling,

Or when grapes are green in the cluster,

Or, at least, when lithe swallows muster

For their far off flying

Why did you die when the lambs were cropping?

You should have died at the apples’ dropping,

When the grasshopper comes to trouble,

And the wheat-fields are sodden stubble,

And all winds go sighing

A Dirge is a song about mourning or expressing grief. The poem is a lament about the randomness with which death strikes and people we love get taken away from us. It is a perfect start to a story which starts with the death of Lula Landry, a troubled super model who commits suicide by throwing herself off her balcony. The title The Cuckoo’s Calling comes from the poem above with ‘Cuckoo’ also being a nickname of the dead supermodel. Lula’s brother, John can’t get over her death and enlists the aid of Cormoran Strike, a detective who’s fallen to particularly distressing times, to prove that his sister was murdered and find who the killer is.

Cormoran Strike is a sexy fellow. Now, he’s not particularly buff or good looking. Neither is he a suave fellow. But he becomes attractive when you read about how methodical he is in his work and of course, quite intelligent. Cormoran is partnered by his secretary Robin (who has a stuffy fiancé), with a very platonic but interesting working relationship. Strike is troubled by his circumstances. He is broke, his relationship with a beautiful woman has ended and he’s living in his office. And this case is like a breath of fresh air, or more like an influx of money that he desperately needs.

The story is not rushed. It’s not a thriller or a novel filled with loads of action. Instead, it follows a languid pace, as it deftly maneuvers through Lula’s life, intermingled with stories about Cormoran’s background. We learn much about Lula, the people in her life, the different dimensions to her personality and the things she was both happy and distressed about. Rowling puts suspicion, alternately, on all the people in her life with clues to the killer, subtly dropped in the story and they are subtle enough to keep you guessing till the end of the story. Of course, that has been a characteristic style of J K Rowling, aptly demonstrated by her Harry Potter books.

Even if you didn’t know this book was written by J K Rowling, it becomes quite clear that the author is not a novice and knows what she is doing. I do not expect people who had read this book before it was revealed that Rowling wrote this story, would have guessed who the true author is. But then when you do know, it would suddenly strike you how you never realized that. There are quite a few parallels that you can draw between Cormoran Strike and Harry Potter. Both of them have troubled childhoods and the books start with both of them living in distressed circumstances. Both of them have a strong sense of justice. Each Harry Potter book is also essentially a story where you want to know who the villain is. However, the parallels end there.

I quite liked the book and after reading this, I am taking a (very) short break as I believe I will end up being so disappointed by any book that I read after this(I usually start reading the next book the moment I finish one, if I have the time). Yesterday, I sat in the Metro doing nothing except observing people as I didn’t feel like reading anything else at all.

Are these the symptoms of a book hangover? Are you also suffering from the same, or have you recently gone through a similar experience? Let me know, by leaving a comment!

And yeah, in case you didn’t know, The Cuckoo’s Calling, published by Hachette India, releases in India on 6th August, 2013 (Tentatively). Pre-order your copy now!

Note: A copy of this book was provided by Hachette India, for an honest review of the book.

Book Covers Amazon listed Go Set a Watchman by Harper Lee as their most pre-ordered book since Rowling’s final book in the Harry Potter series – The Deathly Hallows (2007)... Read More

Why Shashi Tharoor is a Hindu

Reading the book Why I am a Hindu by Shashi Tharoor, reminded me of a dinner table conversation of more than a year ago. It was an educated, white... Read More

[…] seller lists. Having finished reading this book, I can say that this is a MUST READ (Full review here). I hope to read the next book in the series and wish it comes out soon. The book releases in India […]

I’m going through the same phase; of not wanting to come out of the sphere of influence of a good book. Just finished Jodi Picoult’s ‘The Storyteller’. So beautifully written and evocative, exactly like a haunting melody which lingers in the mind. Loved yr review 🙂

Don’t you love when that happens ?! 🙂
Thanks for dropping by! 😀

Am a big fan of JKR and am looking forward tor reading this book…..nice review

That’s great! Thank you for the feedback! 😀

[…] I shouldn’t probably have started Compass Box Killer by Piyush Jha right after finishing ‘The Cuckoo’s Calling’ by J K Rowling writing as Robert Galbraith. The book’s in the same genre of crime fiction but they are both so […]

Lucky girl!!! That’s a hot book to receive for review. Good to know she’s good in other genres other than Fantasy