I had started the Debut Author series so that the readers of the blog could get to know about the authors also, apart from new books. At the same time, it is important to talk to debut authors who are unique just because they bring something new to the table. I have been trying hard to talk to interesting debut authors and I hope you are liking this feature till now.

Today, we learn more about Shovon Chowdhury, new author on the block. Chowdhury does not seem to be one of the new (and typical Indian MBA/Engineer) authors who ‘write’ books to satisfy a particular segment of the population. 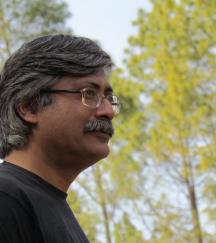 Shovon Chowdhury is at his witty best when he answers some of the questions I pose to him. Do read my review of his latest book ‘The Competent Authority’ before reading this.

1. Tell us something about yourself.

I was born in the UK, and came back to Calcutta when I was 10, because my parents wanted me to be an Indian citizen. So I’m a reverse immigrant – the opposite of Jhumpa Lahiri, or Shilpa Shetty’s husband. I didn’t run away. They made me run back. I had to take a crash course in Bengali. I think I know Hindi as well, but other people don’t always agree.

We’ve lived in Delhi for the last twenty years. I know it has its problems, but I’m very fond of it. When people complain about Delhi, I always think, they should have lived in Calcutta under Jyoti Basu. It was a place were you couldn’t breath without Party permission, and anyone who did any actual work was viewed as an enemy of the people. Also they painted the tip of the Shahid Minar red, lending a whole new meaning to the term ‘erecting a monument.’

2. What inspired you to write this book?

3. Is the Competent Authority based on a person in real life?

I’m not supposed to talk about that. I could be arrested for sedition, or under Section 66A of the IT Act for ‘causing inconvenience’. But he’s real, alright. Who do you think comes up with all the procedures for spectrum allocation? Who was in charge of disbursing Rs 70,000 crores in Maharashtra for irrigation, leading to a 0.1% increase in irrigated area? Who declared Section 144 for 30 days in the town of Thiruvananthapuram, to prevent Dengue? Who do you think makes sure Durga Shakti Nagpal’s transfer orders are properly drafted? He’s all around us.

4. The ending seems a little abrupt? Will we ever come to know what Banani manages to do? Are you going to write a sequel?

I always wanted to end it that way, from day one. Don’t ask me why. I know it’s very simple, but sometimes, life is simple.

I think that’s it for Banani. But you shouldn’t worry. She looks like a delicate flower, but she can take care of herself.

Regarding the sequel, yes, but it’s more of an equel. It describes events that happen at the same time, in Calcutta. That’s where Sanjeev Verma the mining magnate disappears to. I caught a lot of flak for poor writing and loose ends, because he vanished suddenly. I was hoping people would miss him. Apparently some people did. Next time I’ll add a footnote.

I thought Calcutta under Chinese rule might be a fun place to visit. Both parties are equally horrified. Plus there’s the Kolkata Knight Riders under Chinese management, and the lamentable imitation of a Royal Bengal Tiger.

5. What happened to Ali?

He’s roaming the villages of Bengal, spreading the songs of Bob Marley.

6. Was this book difficult to write?

Not at all. I finished it at least six times.

7. The book has released at quite a fitting time. We have Loksabha elections coming soon and everything seems so wrong with the world. Was this release date deliberate?

I took eleven years to write it. The timing had nothing to do with me. I was still messing about with it, because it needed improvement. David just snatched it away from me and sent it for printing. It’s like an exam. At some point, they take away your answer script.

His answers are much like his debut novel, The Competent Authority- witty, playful and yet say a lot. Order a copy now and read this book!

The author on social media-

Have I told you all how I started writing this blog? I was inspired by a book I had started reading, called Stuff I’ve been reading by Nick... Read More

The Thursday Morning Breakfast (And Murder) Club by Liz Stauffer is a debut mystery novel, published by Sartoris Literary Group. It is murder mystery which follows Lilly Mae and... Read More