The Thursday Morning Breakfast (And Murder) Club by Liz Stauffer is a debut mystery novel, published by Sartoris Literary Group. It is murder mystery which follows Lilly Mae and other ‘breakfast club’ ladies, who help the police in tracking down a killer. 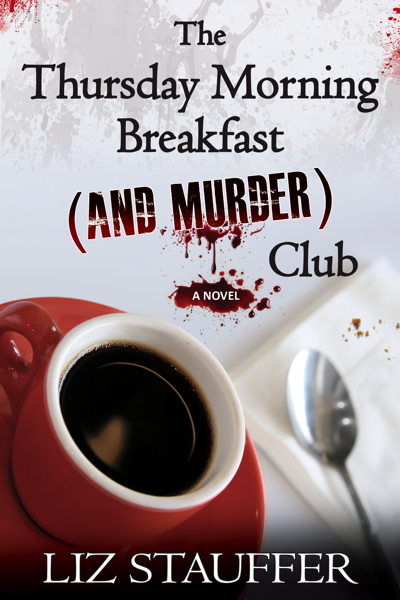 When she spoke the words, her voice was so low it was barely above a whisper. The sturdy woman with short, curly red hair dropped the handset back into its cradle and began to pace, the phone still ringing on the other end of the line.

Lillie Mae Harris stopped at the front window, taking no notice of the white buds that were just opening on the two Bradford pear trees in her front yard, or the spring flowers peeping through the freshly hoed soil in the close- by flower bed. Her thoughts were of Clare.

She had the best view in Mount Penn from this window. On a winter’s morning she could see for some thirty miles out over the valley with the big blue sky as the backdrop. The night view was even more amazing, offering a shower of dancing lights in the distance competing only with the brightest stars.

It was now early spring and the vista had already begun to shrink even though the trees were just beginning to bud. Once the trees were filled out with big green leaves the view would pull in even more until fall when the colors exploded and the view once again took one’s breath away. But today the scenery did nothing to still Lillie Mae’s pounding heart or quell her shaking hands. She couldn’t stop worrying about Clare. Rushing back to the phone, she scooped it up, and punched in a familiar number.

“Hello.” Alice Portman answered in her sweet Southern drawl, after just one ring. Her Jack Russell terrier, Alfred, barked in the background.

“Clare’s not answering her phone this morning,” Lillie Mae said. “I’m so worried about her, Alice. I’m not sure what to do.”

“You were at the water meeting last night,” Lillie Mae said. “You saw how Roger was acting. Yelling and screaming like an idiot. When he’s gotten that riled up in the past, Clare’s been his punching bag.”

“Well, yes,” Alice agreed, deliberately slowing the pace of the conversation. “But, Roger was just being Roger last night, dear. Just showing off. I didn’t see anything unusual in his behavior. Certainly nothing to make you so worried this morning.”

“He was acting worse than usual,” Lillie Mae insisted, still pacing the living room floor. “And I’m sure he drank himself crazy when the meeting was finally over. That’s the real reason I’m worried, Alice. You know how he is when he drinks. What he does to Clare.”

“Roger playacts, you know, when it suits him, Lillie Mae,” Alice said, her voice still soft and cool. “He knows he’s going to make a lot of money hooking people up to the public water in a few short months, but he wants to come across as the good guy to his neighbors, not the money grubbing fool that he is. He’ll use every wile that he has to seduce the community. If the project fails, which it won’t this time, he looks like he’s the man who stopped it. If it passes, he wins big time.”

“You’re probably right, Alice,” Lillie Mae said, calming a bit. “I know Roger is shrewd. If he wasn’t always out there trying to make a deal, he wouldn’t be Roger, I guess.”

“So, stop overreacting, Lillie Mae. What’s brought all this on anyway?”

“I’ve been calling Clare’s house all morning and nobody answers the phone,” Lillie Mae said. “It’s stupid, I know, but I picture Clare lying on her kitchen floor, needing my help. Dead, even.”

A sigh escaped Alice’s lips. “You’re way over dramatizing this morning, Lillie Mae,” she said. “Roger’s not even home. He drove by me in that stupid yellow Hummer of his while Alfred and I were out on our early morning walk.”

“Maybe,” Lillie Mae conceded. “Or she could be in her garden, I guess.”

“She’ll call you back when she gets to it,” Alice said, a hint of impatience in her voice.

“I doubt if she does.” Lillie Mae’s voice broke. “She rarely calls me anymore. We’ve been such good friends for so many years and I miss her, Alice. I wish I knew what I did wrong.”

“Clare’s changing, Lillie Mae. She’s getting stronger. Give the girl some space.”

“I’ve noticed a change, too,” Lillie Mae said, “since Billy went off to university. She does have more confidence, I’ll give you that.”

“Have you written your article on the water meeting for the Antioch Gazette, yet?” Alice asked. “I thought it was due today.”

“Not yet,” Lillie Mae confessed. “I’ve been too worried about Clare.”

“Maybe being busy will take your mind off things that are not really any of your business,” Alice said.

“I guess you’re right,” Lillie Mae said. “Clare’s a big girl and can take care of herself.”

“I know that well,” Lillie Mae said, then suddenly turned serious again when her thoughts returned to Clare. “I’m walking down to Clare’s to check things out before I start on the article. I need to make certain she’s all right, or I won’t be able to concentrate on my work. Do you want to come along?”

“No, you go on, if it’ll make you feel better,” Alice said. “You can fill me in on the details at dinner this evening.”

What happens in my room !

WHAT HAPPENS IN MY ROOM… There is a huge mountain of ice cream at one corner of the room. (No, it’s in boxes) No, there’s no chocolate, I don’t... Read More

We are reaching out to you in your capacity as one of India’s leading book bloggers. Some of us bloggers have started a Facebook Page to showcase books by Indian authors and to feature all reviews by Indian bloggers. Request you to check out the page and leave links to any of your reviews of the featured books. Also if you want us to feature any books on our page, please let us know and we will do the needful.